I have always made things, from the time I got my first toy sewing machine at the age of five but began to take it more seriously in the 1980’s when I did my City and Guilds in Embroidery and achieved a distinction.

From the mid 1990s to the summer of 2012 I exhibited regularly with Textilia III at a variety of galleries in the North West of England. 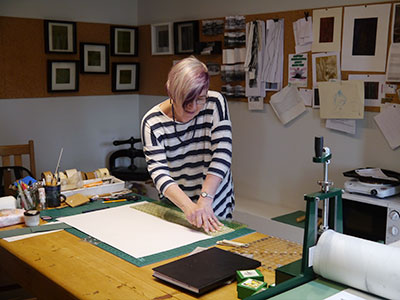 I was introduced to bookmaking by a fellow member of Textilia and went on a couple of workshops and gradually books began to take over. In 2009 I joined with two fellow artists, Annwyn Dean and Joan Newall to form PagePaperStitch. We have exhibited annually at the Leeds Artists’ Book Fair since 2010 and have had several successful group exhibitions: the Beach Hut Gallery, Kents Bank, Signature Gallery, Kendal (2011 and 2013) and Farfield Mill, Sedbergh (2012 and 2014). We also attend events like Art in the Pen in Skipton.

I am an active member of the South Lakes group Green Door Artists and participate in their exhibitions and Open Studio Trails. I also exhibit annually as part of the Silverdale and Arnside Art and Craft Trail. In addition I exhibit at various art markets mainly, but not exclusively, in the North West and Scotland. I am now a member of and exhibit with Cumbria Printmakers. Details of events can be found on the Events page.

I regularly give talks and lead workshops for various groups.

As well as the annual events like Art Trails, Book Fairs, Art in the Pen and the Brewery Christmas Market my work has featured in the following exhibitions and events.

2016
Selected for the Shakespeare themed Book Arts exhibition at Liverpool Central Library. The work from this exhibition later travelled to Italy.
“Through the Mill” at Farfield Mill, Sedbergh with Green Door Artists
Invited to take part in the Highlights Contemporary Craft Tour “PaperScissorsBook”
Selected for the York Art Market

Solo exhibition at the Rydal Hall Teashop, near Grasmere
“A Sense of Place” at Kendal Museum with Green Door Artists
Invited to be one of the guest artists at the annual Witherslack Group Exhibition
Finalist in the Designer Maker category in the inaugural Cumbria Life Culture Awards

2013
Selected for “To the Letter” at the Platform Gallery, Clitheroe
Invited to take part in “Paperworks” at Masham Gallery
Invited to be one of the guest artists at “Craftsmen at the Priory”, Lanercost
Selected for “ArtFest North” in Kendal
Selected for “Collect Cumbria” at Blackwell Arts and Crafts House, Bowness
Selected for the C-Art exhibition at Rheged, Penrith
Featured in the Lark publication “500 Books Volume 2”

This website uses cookies to improve your experience while you navigate through the website. Out of these, the cookies that are categorized as necessary are stored on your browser as they are essential for the working of basic functionalities of the website. We also use third-party cookies that help us analyze and understand how you use this website. These cookies will be stored in your browser only with your consent. You also have the option to opt-out of these cookies. But opting out of some of these cookies may affect your browsing experience.
Necessary Always Enabled
Necessary cookies are absolutely essential for the website to function properly. This category only includes cookies that ensures basic functionalities and security features of the website. These cookies do not store any personal information.
Non-necessary
Any cookies that may not be particularly necessary for the website to function and is used specifically to collect user personal data via analytics, ads, other embedded contents are termed as non-necessary cookies. It is mandatory to procure user consent prior to running these cookies on your website.
SAVE & ACCEPT